Founded back in 2002 by a TV producer Steven Lipscomb who pioneered the concept of broadcasting poker tournaments on television, WPT® is one of the biggest global brands in the poker world. It is a series of the international poker tournaments and associated television series broadcasting the final table of each tournament. The brand has been evolving year by year and has come a long way today.

In 2008, WPT started offering WPT bracelets to the champions across its various poker tournaments.

In 2014, WPT announced its tie-up with Ourgame and agreed to license products and services on an exclusive basis in more than 12 Asian countries. In addition, Ourgame received the rights to use WPT logo and trademark exclusively in Bhutan, Cambodia, China, Korea, Nepal, Macau, Malaysia, Taiwan, Thailand, Philippines, Hong Kong, Indonesia, Laos, and Vietnam and operate on pokermonster.

Later in 2016, the World Poker Tour announced its alliance with Adda52 and agreed to license its products and services in India on an exclusive basis. After this partnership with WPT, Adda52 got the right to host online satellites and qualify Indian players for select WPT events across various parts of the world. Moreover, the company also got the rights to distribute WPT videos and create WPT merchandise and leverage WPT Brand to secure the local sponsorship partners in the country.

In 2017, WPT announced WPT India tournament series as a move to expand its footprint in India. The first edition of WPT India tournament series ran at Deltin Royale casino from 7th to 13th November 2017. Deltin Royale is India’s largest and most luxurious cruise casino which is anchored in Mandovi River in Panjim, Goa. With more than 1400 registrations including 527 entries in the Main Event alone, Season 1 of WPT India proved to be massively successful. Poker-pro Vikas Mantri won the Main Event by defeating Arjun Arora in the heads-up battle and took home the prestigious title and INR 60,30,000 first-place prize .

After the phenomenal success of the 2017 series, the second season of WPT India was conducted in partnership with Adda52  - owned by Gaussian Networks Pvt. Ltd. which is a part of Delta Corp (India’s only gaming company which is listed on both BSE and NSE), from 13th to 19th November 2018 at Deltin Royale. The Main Event, which features INR 55,000 buy-in, was scheduled for 16th to 19th November 2018 and saw a massive prize pool of INR 3.08 cr and the winner taking home the title as well as a prize of INR 66.35 lacs. This seven-day poker festival featured various exciting side-events such as High Roller, Superstack, Bounty, SHIP IT, Kickoff, and Turbo along with one new side-event “Shootout/6 Max NLH” which replaced last year’s Omaha event.

After adding another successful edition in 2018, WPT India is making its way back to the country for its third season. In partnership with Adda52. WPT India 2019 tournament series will be held from 15th to 21st October 2019 at Deltin Royale. The Main Event, which has a entry ticket price of INR 55,000 buy-in, is scheduled from 18th to 21st October 2019. This seven-day poker festival will feature various exciting side-events such as High Roller, Superstack, Bounty, Shoot-out, SHIP IT, Megastack, Kickoff, and Turbo. A Key highlight of this edition will be the visit of Robert Mizrachi who is one of the world’s top-notch professional players with Four WSOP bracelets, numerous of FT finishes under his belt and $7,524,608 in live earnings. Robert will not only be participating in the event but will also be interacting with a selected few winners of Satellites being organised on Adda52.com. 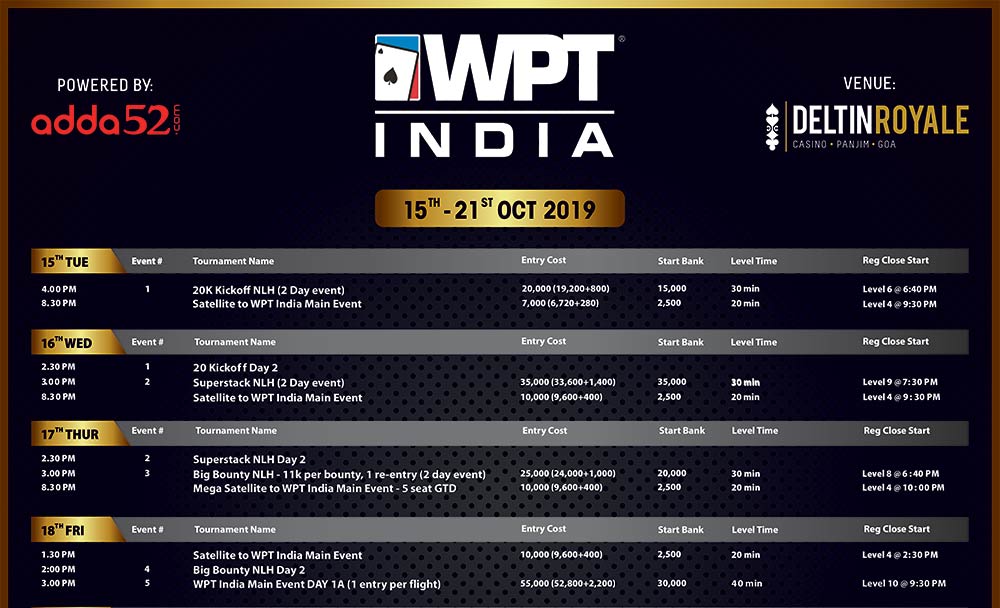 Given below is the complete schedule of WPT India 2019 Satellites on Adda52:

1) Players need to register for WPT India Events at the venue. For registration, all players will require an active Adda52 Account to complete the registration.

2) Mobile verification is mandatory for participation in the satellite.

3) Satellite winnings are non-refundable/non-transferable and will not be refunded in case of Force Majeure.

4) Super Satellite Winner will get the ticket to all 4 events -  20K Kickoff NLH, 35K Superstack NLH, 55K Main Event, 100K High Roller with 6 Nights Twin-sharing accommodation (first-cum-first-serve basis or a reimbursement of up to 27,000) & flights reimbursement up to 10K.

In order to get the travel/stay reimbursement (as per eligibility), it’s must for the player to submit valid bills/invoices and boarding passes. No reimbursement would be processed in absence of valid invoice for stay, Invoice and Boarding pass for travel.

5) The Tournament Director has the right to change table seating to accommodate players. His decision will be final in all matters.

6) All Satellite winners who come in the money will have to pay tax based on their Satellite Buy-in and/or rebuy-in amounts. In  case player does not play due to him being engaged in another event the amount will be refunded post deduction of TDS. All Satellite winner stacks will be put into the pool at the end of late registration.

7) All additional prizes announced by Adda52 will be credited to your Adda52 Account.

8)Satellite winners will have to carry the Adda52 pass to participate in the event.

9)‎It would be mandatory for all satellite winners qualifying for WPT India to wear Adda52.com merchandise (to be provided by Adda52) across the series.